Vinyl Album of the Week Project

New project! I have decided to listen to one album a week from my collection of vinyl. 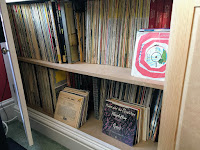 This is quite a large project, as I have a lot of records (I realise this is relative; it's "only" 4-500, which some people would no doubt consider pretty restrained). They're mostly classical and mostly inherited from my grandparents, from both sides of my family. It's all been sitting in boxes and then cupboards since I got them, which is now several years ago.

I have this collection because no-one else seemed to want all these records, and it seemed a shame to just ditch it all. My grandparents were keen listeners to music. My dad's parents went to the Proms every year and in later years were stewards at the Barbican, enabling them to hear music and be paid for it! They also had a decent collection of records and had been members of a music appreciation society, where they would go around to each other's houses and listen to albums. In this era of music on demand, that seems archaic, but it's easy to forget that one album cost the same as a month's Spotify subscription. I know less about what my mother's parents enjoyed but since they had a larger collection, it seems only reasonable to assume it was also something they counted as a hobby. So all these records were presumably valuable to them and were listened to.

Anyway, as a result, I have what might charitably be called an eclectic collection, ranging from the fifties to the mid-eighties, covering all sorts of classical music, but also a little easy listening, American-songbook type albums and the occasional pop record (I did notice an original 1967 copy of Sgt. Pepper in there - excellent condition but not worth much because, of course, it sold millions!). 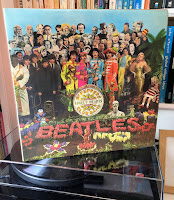 They all now sit comfortably in a custom-built cupboard (not built for me, it was in the study when we bought the house), nestling alongside the vinyl I bought as a teenager, before I moved to CDs in about 1988.

I've been thinking about doing this for a while, but it was made slightly more difficult by the lack of a record player. Actually I did have one for a while, another inheritance from a grandparent, but it didn't work very well. It was a Technics, so potentially a decent turntable, but I think this one was actually just part of a whole system so probably at the cheaper end of the market - in about 1985. Anyway, each time I tried to use it, the sound cut out, so eventually I gave up and got rid of it.

However, a couple of weeks ago, prompted by a reorganisation of the study and the consolidation of all the vinyl into one cupboard, I decided to finally buy a proper turntable - the first I have ever bought, in fact. I didn't want anything fancy but did want something of a similar sort of quality as the rest of my hi-fi system. (Actually, most of my system is "starter" grade by the standards of serious aficionados ... but oh well. It sounds pretty decent to me.) I eventually plumped for the Pro-Ject Debut Carbon DC, which gets good reviews and comes with an upgraded Ortofon 2M Red cartridge (bought from Richer Sounds, superb service from them, by the way).

I've had it for a couple of weeks now, and I've been enjoying spinning the occasional disc. It's such a different experience from how I normally play music now, and it's fun to be reminded that this is how I listened to music for much of my formative years. But it's such a faff! I'm definitely not one who finds the ceremony of carefully extracting the record from its sleeve, placing it on the platter, cleaning it, locating the needle precisely, and finally lowering it, enhances the experience in any way. It's just tedious.

Nor do I think the music sounds better for the all-analogue signal path. I've A/B'd couple of albums now and while I can hear differences, I think it's much more to do with the mastering that the playback technology. 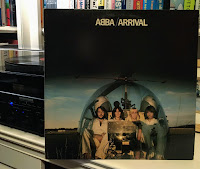 For example, ABBA's Arrival definitely sounds more "open" on vinyl than CD (actually, ripped to FLAC, fwiw), but the audio on CD sounds to me like it's been compressed to make it louder - which was a very 90s thing. On the other hand, I compared a recording of Haydn's Die Jahreszeiten on vinyl and via Spotify, and the streamed audio was slightly more detailed, although not by much. Indeed, one of the surprises to me was generally how good the vinyl sounds. I don't quite know why I was surprised by this, but I was.

But I am still going to do this, despite it being a faff, and despite there being no real difference in sound quality, and even despite finding that quite a few of the recordings are available on Spotify. It's not really the point. These albums belonged to my grandparents. They are literally irreplaceable. It's a way of connecting to them, and discovering a whole genre of music that I'm not very familiar with at the same time.

I don't have any structured way of selecting albums, since I don't actually know what I've got yet! I'm slowly adding to my collection on Discogs, and I will select each week from those I've already added to it. I'm giving each recording a week, because I know from experience that I have to live with unfamiliar music for a while so that it can sink in - and this applies double or triple to a genre like classical, which I don't really know at all.