Schumacher (2021)
Schumacher's dominance coincided with the period when I was most avidly following F1, and unlike some people, I didn't find this unappealing. To see an athlete at the top of his game - and, let's be clear, Schumacher was the best of his generation, by quite a margin - was a wonderful thing to watch. Obviously, in F1, it's not just about the driver and Ferrari used everything they could to get and maintain their advantage, but that doesn't take away from the man's brilliance. Oddly, the film doesn't emphasise this as much as I'd expected, although there's plenty about his driving. Instead, it tries to balance this with more about the man and his family. Given the extensive involvement of his wife and friends, this is perhaps unsurprising. And in fairness, it doesn't shy away from addressing some of his more notorious controversies, giving time to Damon Hill to say that he thinks Schumacher deliberately turned into him during the 1994 Japanese GP, and showing that just about everyone thinks he did the same to Jacques Villeneuve in 1997. An interesting film, but as an F1 fan I could have done with more driving and less schmaltzy background music.
North by Northwest (1959)
I watched this after seeing Mark Kermode's Secrets of Cinema episode about spies. I can't remember the last time I saw it, although the iconic scenes are very familiar of course. It's surprisingly long at over two hours, and the romantic elements are about as believable as Dick Van Dyke's accent in Mary Poppins, but it's a great plot and a classic film of course. The train going into the tunnel at the end made me laugh - I can't believe that symbolism was ever actually used, but there it is!
Free Guy (2021)
For the last few months, YouTube, that reliable barometer of public opinion and taste (ahem) has been pushing Ryan Reynolds videos at me, specifically ones where he is being sarcastic on chat shows - which he is very good at. So I was primed for this I guess, and it popped up on Disney+ so it was a good one to watch with Z. I really liked it: a kind of cross between Ready Player One and The Lego Movie, with ideas not too dissimilar to Christopher Brookmyre's Bedlam. In fact, so good I watched it twice.
Soul (2020)
We watched this when it came available on Disney+ but the rest of the family seemed to be underwhelmed. I really liked it and rewatching it didn't change my opinion. I think there's a message there but I can't decide if it's "make the most of your life" or "play more music".
No Strings Attached (2011)
Oddly, this and Friends With Benefits came out at almost exactly the same time, with pretty much the same plot idea. This is the lesser of the two though, as Natalie Portman and Ashton Kutcher just don't go well together, and when you start comparing them with the sassiness of Mila Kunis and Justin Timberlake ... well, there's a reason I only remembered that I'd actually seen this before when I was about half-way through. Still, ticks most of the right romcom boxes.
Friends With Benefits (2011)
And just to remind myself - I have seen it before, several times - I watched this again. Sure, you can quibble with a couple of bits and pieces but the whole thing just bursts with life.
Summer of Soul (2021)
Fascinating documentary about the Harlem Cultural Festival in 1969 - something broadly concurrent with Woodstock, but not celebrated for some reason. Lots of great footage: Stevie Wonder about to enter his goldern period; Nina Simone on imperious form and introducing "To Be Young, Gifted and Black" for the first time ever; Sly and the Family Stone, probably the only act to play both this and Woodstock and as awesome as always. Mixed in with all of this is background and context footage, topped of with some very touching interviews with people who were there but haven't seen it for fifty years. Essential viewing.
Martha - Meet Frank, Daniel & Laurence (1998)
Comfort viewing.
Pretty Woman (1990)
It's a classic, but I wonder how many people watching it really think about the realities of Vivian's life? The film attempts to deal with it, but overall it seems very much of its time. There's something very 80s about the way it glosses over the sordid realities of prostitution and presents it as just another lifestyle choice. Would the story have been any less enjoyable - or successful - if Vivian had been working any other low-rent job? Or was the frisson of illegality and sex required? If you can ignore these aspects of the film then it's a nice story.
Black Widow (2021)
Fairly standard MCU fare. If you strip out the fight scenes, there'd be about twenty minutes of actual plot, and I can't say I followed it that closely anyway. One for the fans, I think (who, as I understand it, had been asking for the Black Widow back-story for a long time).

Stored in the circular file under watching 2021

I once met Zippy - sort of, anyway. It was about 1987 or 1988 and Rainbow was touring theatres with their Rainbow Roadshow, a kind of simple pantomime for the young kids who were their normal audience on the telly. As wacky students, we thought it would be highly amusing to attend when it came to Manchester. We did things properly: we booked a box for the three of us, dressed up in black tie for the occasion and had a couple of drinks in the theatre bar before the afternoon performance.

We thoroughly enjoyed ourselves, participating noisily during the sections that invited it - enough at one stage to warrant Geoffrey to ask the audience something like "Where are the sweets, boys and girls?" and then immediately point to us and say "Not you!" I hope we were just enthusiastic and boisterous rather than boorish: we weren't trying to spoil the show, we genuinely loved Rainbow as we had been kids ourselves during its 70s heyday.

Naturally, after the show we raced straight round to the stage door to wait for our heroes to sign our programme. Of course Geoffrey Hayes recognised us and gave us a signature, although declined our offer of a pint later ("Sorry boys, had a bit of a late one last night"). Bungle also appeared, without his costume of course - probably Malcolm Lord, as far as I can tell. And then a man came out and signed for both Zippy and George, and we were very impressed that the same man did both. Of course, we didn't realise at the time that he only did the voices, and the puppets were operated separately by other people. Based on what the book says, this must have been Roy Skelton, who did the original Zippy voice for years and years.

So sadly, I can't say I met Ronnie Le Drew, who says he refused to have anything to do with the roadshow but otherwise is known for operating Zippy for decades, it turns out. What I can say is that we were ahead of our time, as Ronnie says in the book that it wasn't until almost a decade later that the Rainbow characters starting taking advantage of their retro popularity and appearing on adult shows and touring universities and the like.

A puppeteer, however well-known in the industry he may be - and Ronnie Le Drew is obviously one of the legends - is always going to be pretty anonymous and I had never heard of him before I read this book. However, his autobiography is entertaining and engaging and worth a read. Operating puppets is clearly a vocation for him. It's never going to make you rich (well, unless your surname is Henson) and Le Drew has had his ups and downs like anyone, but he seems happy to have been able to make his passion his work too, and that comes across very well. He's self-effacing and amusing about his brushes with fame - getting star-struck  and tongue-tied when coming across David Bowie on the set of Labyrinth for example - and interesting enough for me to want to know about his life.

First Impressions 4: The View From Halfway Down 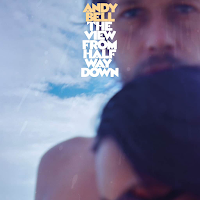 With a title that reminds me of Kermit's nephew, I wasn't sure what to expect from this. Andy Bell has had a varied career, starting in teenage shoegaze sensations Ride, via underrated Britpop also-rans Hurricane #1 and then to a surprisingly long stint with obscure pub rockers Oasis. His stint in Hurricane #1 in particular showed what an inventive musician he is - just have a listen to "Remote Control" or the single of "Rising Sign" (the album version is the annoying MBV remix, for some reason).

What we get is has obvious similarities with Ride, but a bit less intense, instead being more relaxed and laid back. The whole thing has a late sixties/early seventies feel, with the most obvious influence being Neu, whose "Hallogallo" groove crops up a few times, mixed with the psychedelia of early Floyd and Traffic.

Stand out tracks for me are the first track, "Love Comes In Waves", which has very Ride-esque harmonies over a motorik groove and reverb-drenched guitars, and the last track, "Heat Haze on Weyland Road", which caught my ear with its Kraftwerk-ian retro electronica. In between these two are some nice sounds, like the great backwards guitar work on "Aubrey Drylands Gladwell" and the acoustic Neu-ness of "Skywalker". There's a few too many instrumentals and occasional nothingy noodliness that I could do without, but overall it's a good album that doesn't outstay its welcome at eight tracks - an album I'm pleased to have found entirely by accident and will be listening to again.