Borrowing Trouble by Stacy Finz (2016)
I have to admit, this series is getting under my skin. I suppose it's the same reason soaps are so popular: you get the familiarity of the same group of characters and each has their own story, so it's like a family. There's a suspense element to this because each of the main characters has something in their past that they are worried will catch up with them. It provides the main push for the romantic tension but detracts from the story a little because I was always waiting for something to happen and it didn't until almost the end. Still, another satisfying story from the Nugget series.
Heating Up by Stacy Finz (2016)
And so on to the next in the series, in which the brother of the main female character from the previous book arrived in the perfect little town of Nugget and instantly falls in love too. There's a slight thriller/whodunnit element that was pretty obvious from about a third of the way through the book (and if it's obvious to me, that means it's really obvious), but it doesn't detract from the main story, which is as engaging as always.
Greetings from Bury Park by Sarfraz Manzoor (2007)
This source material for Blinded by the Light doesn't seem an obvious choice to be made into a film, until you discover (as this later edition makes clear) that it was adapted by the author himself. I wouldn't have read this if I hadn't seen the film, as I didn't know who Manzoor is and have little interest in autobiographies (notwithstanding this month's choices). However, it's a very good read, if depressing in places, and the general theme seems to be about the head-on collision between two different cultures: British culture and Pakistani culture. It raises some interesting questions about integration into society and how to draw the line between tolerating tradition and denouncing it as abusive.
How Not To Be A Boy by Robert Webb (2017)
I read this because I'd enjoyed Come Again, rather than because I know or am interested in Robert Webb. In much the same way as the previous book - whose author I was also unfamiliar with - it seems to be about someone trying to escape their upbringing. It also feels like a sort of companion piece to Caitlin Moran's How To Be A Woman, or at least heavily inspired by it. The chapter titles are descriptions of masculine expectations ("Men Don't Cry", or something like that - I don't have the book in front of me), and his main point is that these expectations cause many problems for men, women and society. It's hard to disagree with this, but Webb seems to simultaneously want to accept responsibility for his misdeeds on the past and blame them on society. It's an interesting read, but it's patchy and a bit too self-flagellating for too long.
Riding High by Stacy Finz (2016)
This series of books is starting to seem a bit formulaic now, although in fairness it's a good formula that's kept me interested and I'm probably due a break. Again, there's a element of tension (a looming criminal charge in this case) that's never going to put the conclusion in doubt, so the interest is in seeing how it plays out, as much as anything else. 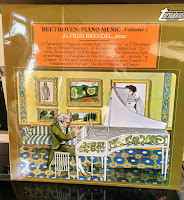 It's been a very lengthy break in my increasingly inaccurately named Vinyl Album "of the Week" project. This was because my record player was misbehaving and so eventually I took it back to Richer Sounds in Southampton, who couldn't have been more accommodating or helpful. We listened to it in the store and they claimed to be able to hear some sort of distortion in the left hand channel as well. If I am honest, it was barely audible in that environment, which makes me think it's probably something in my home setup, sadly. They still sent it off to the manufacturer for checking and eventually got it back to me with a clean bill of health. Or, to put it another way, with no changes, since they couldn't find anything wrong.

Anyway, I got it back about a month ago and picked this album out, at random, for the next in the series. Unfortunately, it probably wasn't a great choice. Each of the several pieces on this album is a variation on a different theme by another composer. They feel a bit like academic studies, exercises for students or just a demonstration of the different ways a single theme can be changed, reharmonized or turned upside-down. I'm sure it's very sophisticated - this is Beethoven, after all - but it all goes completely over my head. As pieces of music, they seem meandering and aimless. The only bits I can remember are some particularly dissonant chords during the "Eroica Variations" (aka "15 Variations & Fugue On A Theme From ''Prometheus'' In E Flat Major, Op. 35" - catchy title!) that caught my ear because they stick out so much.