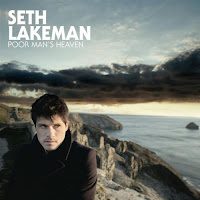 I have to admit that, beyond having heard or read his name in passing somewhere (probably, if I really think hard about it, mentioned briefly in The Word's coverage of the Folk Awards), I know nothing about Seth Lakeman. I went along to this gig out of a simple wish to do something other than sit in my hotel room or a bar all night. (Not that sitting in a bar all night doesn't have its attractions. But there would be time for that after the gig.)

It could have all gone very wrong, I guess. I arranged to meet up with a colleague at 8, a time chosen completely at random, so we could have been late for the start. The tickets could have all been sold out. The venue could be a dive. And it could have turned out to be dire, finger-in-the-ear folk.

However, thankfully, none of these eventualities transpired. The timing was perfect; the tickets were available; The Liquid Room is great, just the right size; and, best of all, Seth Lakeman plays a muscular, involving music that is a pleasure to listen to.

There was a good crowd, a complete mixture ranging from fresh-faced students to beer-bellied oldsters (including male and female examples of both), who were respectfully enthusiastic about each song, warming up towards the end. Possibly a later start would have ensured a more well-lubricated and liberated crowd, but the gig had to be fitted in before the "Indi-Nite" club starting at 10:30.

Seth came on enthusing about his last gig in Edinburgh, at the same venue, and looking rugged in jeans and a tight t-shirt. Now I understood why there were more women in the audience than I had expected. The band - Seth on violin and tenor guitar, Seth's older brother Sean on acoustic guitar, a drummer and a double bassist (presumably Cormac Byrne and Ben Nicholls, respectively, although I didn't catch their names for sure) - created a nicely balanced, full sound that was articulate and rich without being overwhelming. They all put their backs into the performance, Seth being drenched by the end, but I was particularly struck by Ben Nicholls, who gave the old bull fiddle (as I'm sure no-one actually calls it) some fantastically nonchalant slap and tickle and really enhanced the sound.

The songs were all new to me and so had a tendency to sound somewhat similar, partly due to the instrumentation and partly due to the folky tendency to focus on events from the English civil war or life at sea. Having said that, and having subsequently listened to some, I can hear the differences now!

All in all, a very enjoyable gig, a pleasant surprise and a new discovery for me.

Bearing in mind my complete ignorance and based on what I could hear of the announcements at the time, here is what I believe to be the set list: