The Week (2 November 2013 / Issue 944))
The Mysterious Affair At Styles by Agatha Christie (1920)
Agatha Christie was probably the first "grown-up" author I read (my mother's influence, I expect) and I come back to her books every now and then. A classic mystery. I read it online thanks to Project Gutenberg.
How To Be A Woman by Caitlin Moran (2012)
The Les Paul Guitar Book by Tony Bacon (2009)
Third edition of a very nicely presented history of the legendary guitar. The printing is excellent quality and the pictures are lovely, but I don't like the house style of alternating two pages of text with two of illustrations, although I can understand why it's done. I could also have done with more technical details about the guitar as well as the history.
The Sacred Art Of Stealing by Christopher Brookmyre (2002)
One of my favourite books (this is the second time this year I have read it). I really like the characters.
The Week (11 November 2013 / Issue 945)
A Snowball In Hell by Christopher Brookmyre (2008)
The sequel to The Sacred Art Of Stealing, with Angelique and Zal returning, and Simon Darcourt reappearing. Sick in places - in, um, a good way - and highly acerbic. Part of the satire involves the hypocrisy of the "general public" who profess to despise the celebrity shennanigans but buy the newspapers that report it by their millions. We, the readers of this book, are of course above this - as we read a book that uses such (albeit fictional) shennanigans as plot points. Anyway, very funny.
Guitarist (December 2013 / Issue 375)
The Week (18 November 2013 / Issue 946)
A Field Guide To The English by Sarah Lyall (2009)
More pointless drivel from mark No comments: 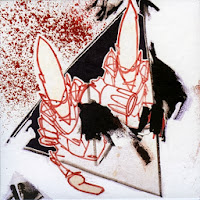 Introducing ... looks like a promo-only album, since it appears in no UNKLE discographies (and it says "for promotional use only, not for resale" inside ...). I found it secondhand in our Berwick Street trawl earlier this year. UNKLE has been on my radar for a long time but what particularly sparked my interest was that they made a track with Alice Temple (of Eg & Alice, um, "fame". Well famous in my head for their peerless album 24 Years Of Hunger - but that's another review).

Sadly that track doesn't appear here. This album is a selection from their work up to 2006 and consists of two disks. The first contains UNKLE originals and is pretty good. My current favourite? I'm torn between "Reign", featuring Ian Brown, a first cousin of his track "F.E.A.R.", which features string parts over a good beat; and "Eye For An Eye", a nicely apocalyptic. spooky mix of spoken word samples and the sung refrain from The Temptations' "Ball Of Confusion" - "an eye for an eye, a tooth for a tooth, run run run but you sure can't hide". "Blackout" is heavily reminiscent Massive Attack circa Mezzanine - no bad thing, of course. Another Ian Brown collaboration, "Be There", is good too.

Other tracks feature Richard Ashcroft and Thom Yorke and, in each case, sound like their respective bands with some more beat-oriented production. Overall, I like all this material. Time to get the released albums, probably.

The second disk is made up of UNKLE remixes of various artists, including Massive Attack, Robert Plant, QOTSA and Ian Brown's aforementioned "F.E.A.R." Generally I'm no fan of remixes, regarding them as unnecessary arsing around with perfectly good songs that do nothing to improve on the originals. There are some notable exceptions, of course, but none of these songs feature in that list. Disposable.
More pointless drivel from mark No comments:

A Field Guide To The English

There is a surprisingly popular and populous sub-genre of non-fiction that attempts to analyse and categorise the English. Some represent a serious attempt to understand the unique cultural and sociological factors that distinguish Englishness. Some use the excuse of defining "the English" as a way of pedalling their own prejudices. Still others are happy to play off stereotypes for comic effect.

Despite its almost serious title, A Field Guide To The English fits firmly in the last category. Notwithstanding occasional references to the "research" she has conducted for various New York Times pieces, Sarah Lyall - an American journalist - has clearly used the standard journalist practice of using her friends and other people within easy reach to support her own preconceived ideas. Accordingly, English people are afraid of intimacy and sex (the men are all borderline homosexual, apparently), we all have bad teeth, the aristocracy are completely mad (and ludicrously mean with money), we have incomprehensible enthusiasms about trivial things like hedgehogs ... and so on.

This portrait is of course unrecognisable to any real English person - or, at least, only recognisable as a small but prominent part of our society. What is obvious to anyone is that Sarah Lyall has married into a comfortably upper-middle class English family (she lives in Kensington and weekends with Earls, for goodness sake) and has been happy to draw over-broad generalisations from the narrow section of society she has been exposed to. Her observations are generally shallow and cover surface manifestations only. This is all the more odd when you consider that she mentions (and has therefore hopefully read) Kate Fox's peerless Watching The English and should therefore have acquired some understanding of the deeper causes.

To be sure, she manages to score a few points against the more obvious targets: yes, the conduct of politicians in an out of the Houses of Parliament is just embarassing; of course our tabloid "news" papers are a disgrace to journalism. No-one with any sense disputes this. No country is without its peculiarities. Lyall is a good writer and the book is amusing in places. I just would have liked more observation and fewer stereotypes.
More pointless drivel from mark No comments:

Stored in the circular file under book, reading 2013 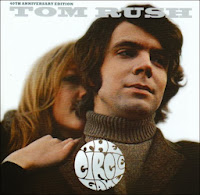 The Circle Game is somehow both endearingly of its time and yet surprisingly timeless. Helping the latter attribute is the presence of several classic songs; Joni Mitchell's "Tin Angel" and "The Circle Game", and "No Regrets", better known in The Walker Brothers' version.

But these tracks are - and this point is of course of prime importance to rock snobs and pop anoraks alike (I leave it to you to decide where I fit) - the originals. In 1968, Joni was an unknown and struggling songwriter, and Rush was trying to promote her. As a result his version predate hers. The contrast is interesting: "Tin Angel" here is a measured, autumnal reading. Joni's own version (from 1969's Clouds) is a brittle, slightly callow version, shrill by comparison.

Nor was Tom Rush any slouch himself as a song writer. Two of the best songs here, "Rockport Sunday" and the now standard "No Regrets", are his own. Again, the difference between the gently acoustic and melancholic original here, and The Walker Brothers lushly orchestrated 1976 cover is primarily one of subtlety. Tom Rush has a nicely understated touch on all of the songs here, even the more upbeat (and slightly less memorable) songs here.

An enjoyable find (thank you, The Mojo Collection) that hadn't registered with me ever before. Worth finding.
More pointless drivel from mark No comments:

Stored in the circular file under mojo collection, music

How To Be A Woman

The book is partly an autobiography, but Caitlin Moran uses the stages of her life as jumping-off points for discussions about issues affecting modern women. For example, the onset of puberty leads into a discussion of why it is now considered necessary for women to shave all pubic hair. Ageing sparks a debate about why so many women attempt to stall their years at the late thirties with extensive cosmetic surgery.

The whole thing is both very entertaining and thought-provoking. As a fellow left-ish liberal, I find little here to disagree with or anything that doesn't just seem like common sense. One of Moran's central observations (I think) is that modern "feminism" seems to have split into a dichotomy of extremist man-haters and the successors to the "new ladettes", for whom freedom is the freedom to flash their knickers or knockers at whoever they want. Her point is that, inevitably, the truth lies somewhere in between; her repeated question is "are the men doing this too?" - and, if not, why not?

The only thing that doesn't strike quite true is the way that she describes "all women" as being subject to a series of pressures - to look young, to get a Brazilian, to slim down, to get married. Now, obviously I am a man in his forties and so miss much of what pressures are applied to teenage or young women (although I expect to find out in about three years when my daughter reaches that age). However, I really don't get the sense from the women my age that they feel the pressures mentioned here to that degree. All of them are well able to distinguish between the simplistic, sensationalist and stupid attitudes of the media ("Get this season's must-have trousers! Don't let your man see your wrinkles!") and real life. I'll have to get one of them to read it and comment.

Anyway, very enjoyable and only made slightly disconcerting by the fact that in her picture on the cover Caitlin looks exactly like my friend Ruth.
More pointless drivel from mark No comments: