My Favourite Xmas Song ... Ever! 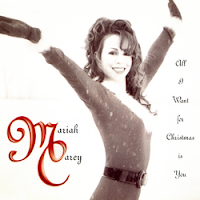 I'll come out and say it straight away.  My favourite Christmas song - ever! - is Mariah Carey's All I Want For Christmas Is You.

I wouldn't call myself a rock snob but plenty of other people would do, and Mariah Carey is probably the antithesis of all that a rock snob stands for. But I love this song.

Here's why: it's got a chrome-plated, copper-bottomed, solid gold, billion carat diamond of a melody, the kind that doesn't just stick in your head but lodges itself in the culture's collective unconscious. It's a force of nature, indelible, permanent. It's like one of those curses that, once raised, can never be escaped.

Imagine writing a tune like that. You could start shopping for yachts the next day. Considering which Caribbean island was nicest - to buy.  Certainly stop worrying about your pension.

It is a classic song, of course. It could have come off A Christmas Gift for You from Phil Spector, which was released in the early sixties. Possibly most people think it did. Maybe they think - if they consider the matter at all - that it's even older than that. It sounds so traditional, doesn't it? But astonishingly, it isn't. Do you want to know who wrote it? Do you? Really?

Only bloomin' Mariah Carey, that's who.

It's tough being a rock snob. There I was ready to dismiss this version as a carbuncle on the face of a classic Christmas song and it's only the bloody original (knowing the original version is very important to a rock snob). Maybe there are better versions, but they weren't first.

And, I have to be honest, I don't just love this song - I love this version. Sure, the production is a cheesey and cliché-laden pastiche of the Phil Spector sound, Mariah's voice is a blunt instrument, as indiscriminately powerful and impersonal as ever, and the melismatic introduction is lamentably ill-considered. But someone - her co-writer and co-producer Walter Afanasieff? Mariah herself? - has had the sense to realise that you can't fuck with that melody. Introduction despatched, the track is a steamroller, flattening all objections.

I don't care that being a fan of this song probably gives me less credibility as a music afficionado than being related to Andrew Ridgley. I'm listening to it right now and it's fucking great.

(And do you see what I did? I know Phil Spector's album, I know who wrote the song ... classic rock snob behaviour ...

[Originally posted (by me) on last.fm, March 2007]
More pointless drivel from mark No comments: