The Day Of The Jackal

Obviously a classic.  And according to an article in this month's Word magazine, Forsyth just sat down and wrote it, at 30 pages a day or something.  I'm sure it wasn't that easy, because the amount of detail in the book is astonishing.  Of course, as a journalist he gathered info all the time, but surely it took some research?

Anyway, it's a good read - not too long, a satisfying plot of sufficient complexity and an aura of reality so convincing that apparently many people have to be reminded that it is, in fact, fiction.

I have little interest in history and, generally, almost none in that of countries other than my own.  In this I judge myself similar to most people.  In some respects, the book's greatest achievement may be to be of interest to people like me despite being about another country.
More pointless drivel from mark No comments: Links to this post

Stored in the circular file under book, forsyth, review

Julie Is Her Name 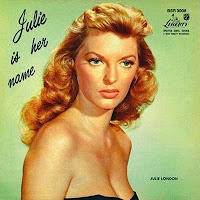 This is even more minimal than Black Coffee - just Julie, a guitarist (the legendary Barney Kessel) and a bassist (Ray Leatherwood). The tempo is equally downbeat, but for some reason this doesn't sound as smoky and late-night sultry as Peggy Lee's album.  It's still beautifully evocative of its era though, with a lovely romantic feel - like the aural equivalent of a soft focus lens.

The first song is the classic "Cry Me A River", which would justify the purchase of this album alone.  The rest of the songs are mostly standards, and my favourites are "It Never Entered My Mind" and "I'm In The Mood For Love".  The occasional forays into more up-tempo numbers are less convincing, because they highlight Julie's limited range and power as a singer.

Overall, I found this to be a bit backgroundy-muzak, which is a shame in some respects because it is worth listening to carefully.

This came on a CD with Julie Is Her Name Vol II (1958), an album in exactly the same style and equally pleasant.
More pointless drivel from mark No comments: Links to this post 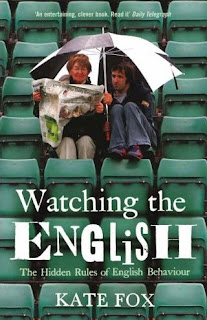 I like recommending books to people and there are two that I think I have suggested to people more than any others.  The first is William Goldman's Adventures In The Screen Trade, and I'm now on my third copy because the previous two haven't been returned.

The second is this.  Subtitled "The Hidden Rules Of English Behaviour", it covers the oddities, idiosyncrasies and eccentricities of English behaviour from the point of view of a professional anthropologist.  In this it differs from previous, well-known analyses of the English character by such luminaries as Jeremy Paxman (The English), Bill Bryson (Notes From A Small Island) and Jilly Cooper (Class).  Entertaining as these all are, they all struggle to escape the cliches; and intelligent and insightful as the authors are, they are not looking for the same things as an anthropologist.

This becomes clear when Kate Fox examines some of the most often cited aspects of the English character.  For example, most people comment on the politeness so common in England - all the pleases and thank-yous, the after-yous, and so on - but she identifies it as arising from a deep-seated unease about how to interact with people.  She calls this a "social dis-ease" (ho ho) and points out that the flip side of it is a tendency to go too far the other way in certain situations and become loud and obnoxious.

Despite being a serious book of anthropology, this is nevertheless a highly entertaining book that not only identifies the rules of behaviour (e.g. the "hidden queue" at a pub bar) but does a good job of putting it into a context.  If in some places it resembles observation-based comedy ("have you ever noticed how everyone does this ...?" type routines), it's because it's based on the same sort of material.  And to be fair Kate Fox acknowledges this herself.  But she goes further by analysing the reasons behind it.
More pointless drivel from mark No comments: Links to this post