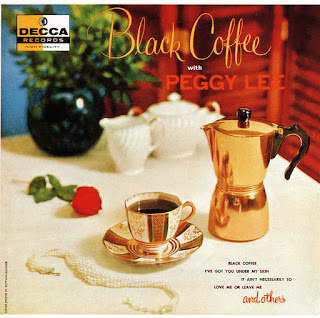 My knowledge of the Great American Songbook is limited to exposure to it via Fred 'n Ginger films and the Red Hot + Blue compilation - something I hope to rectify via my immersion in fifties music.  A number of them feature here, from the Gershwins, Cole Porter and Rodgers & Hart.  The instrumentation is sparse, limited mostly to piano, double bass and drums, and puts Lee's breathy, vibrato-laden voice centre stage.

My favourite is "My Heart Belongs To Daddy", an up-tempo swing through the classic Porter innuendo-fest.  Somehow it has a dark edge to it (and not, I think, the kind of edge that a 21st century sensibility would attribute to it).

Most of the rest of the album is very relaxed and slower in feel, apart from a decent version of "I've Got You Under My Skin" (which, while good, can't match Sinatra's ... but then, whose can?).  I also rather like the sultry "Gee Baby, Ain't I Good To You?".  I didn't know anything about Peggy Lee before this, but this will get more plays in my house.  And the edition I bought came with the album Dream Street as well.  Which is nice.

Great mood music, and something out of the ordinary from my point of view.  To be tested at our next dinner party!
More pointless drivel from mark