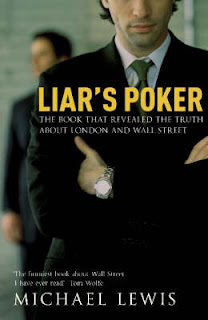 Last week a video was doing the rounds on Facebook and twitter of a trader who flabbergasted the BBC interviewers by claiming to be looking forward to the oncoming recession because he was going to make loads of money from it.

He was subsequently revealed to be a fake and general attention seeker but one of the reasons he caused such widespread outrage was that he sounded so convincing.  How?  Well, I don't know, but I'm betting he's read Liar's Poker.

Many of the characters in the book are exactly like him - single minded, amoral (note: not immoral) and utterly unconcerned with the possible side-effects or wider issues caused by their behaviour.  They do what they are paid to do because they get a kick out of it and because they are paid very well.

Lewis's book dates from 1989 and so doesn't cover anything to do with our more recent mess but the basic causes are clearly the same.  He saw the change, roughly from the late 70s to the mid 80s,  from when traders were well paid to when they were obscenely well paid - and became one of them.  He discusses the reasons in a light, non-technical way (although some of the financial details still made my head hurt) and gives a good and entertaining overview of the way things have become - and, no doubt, still are in many respects.

I've never really looked into the financial culture, beyond a basic knowledge that some chancers get very lucky, but I have to say that the scale and effects of their activities really shocked me.  That's probably naive of me.  It's still depressing though.

Anyway, the book is a classic (it says so on the cover) and well worth reading.
More pointless drivel from mark

Stored in the circular file under book, michael lewis, review