Bread Matters: Why and How to Make Your Own 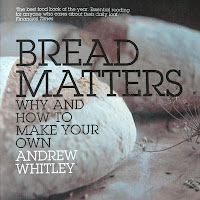 As the title makes clear, this isn't just a book about how to make bread at home, but also why you should consider doing so. A significant part of the book is devoted to explaining what's wrong with the loaf on the supermarket shelf: what extra ingredients go into a mass-produced loaf and why they are there. Most, it turns out, are not there for your benefit as a consumer but for the manufacturers' benefit - to make the bread keep better, look larger, fuller and more attractive and so on. I broadly knew this already but hadn't come across the detail that this book contains, which is all very interesting and in some cases, concerning.

Most interesting is Whitley's assertion (backed up by referenced studies) that much of what manifests as "gluten intolerance" in many people is actually an intolerance for inadequately fermented gluten. Modern bread is made as quickly as possible, of course, but although the manufacturers have found ways to artificially accelerate rising times, what they haven't done is replicate the more complicated fermentation process that breaks down indigestible proteins over several hours of rising and proving. The suggestion is that bread made more naturally - slowly - is better for us because it will have had a chance for the nutrients to develop properly, and in particular better for people who have had problems with mass-produced bread. (Note that he doesn't include coeliacs in this, who are actually allergic to gluten,.)

If you want to make your own bread, avoiding these unnecessary ingredients, it follows that you should use primarily home-grown yeast too, and most of the recipes are broadly "sourdoughs". I'm not a huge fan of sourdough but Whitley's approach to sourdough starters, leavens and so on (there are various names) is slightly different from any others I've read and so it's quite possible that the breads will be different too - I haven't tried to make any yet but I am keen to try.

This book is interesting, comes from a different perspective to any others I have read and is a worthwhile addition to any collection of baking books. I read this on loan from the library but will probably buy my own copy. However, it's not the right book for someone just starting out making their own bread, because it does suffer from two significant problems: first, it's too long, and second, it doesn't have enough pictures. I don't need glossy photos of nice looking loaves particularly, but illustrations of the process are invaluable to anyone starting out.
More pointless drivel from mark No comments:

Stored in the circular file under bread, reading 2016

The Week (2 July 2016 / Issue 1080)
Published only days after the referendum and already out of date. The perils of printed news.
Roarke's Wife by Beverly Barton (1997)
Kind of a combined romance/whodunnit. Appealing in places but a little unbelievable in others.
The Week (9 July 2016 / Issue 1081)
Guitar & Bass (August 2016 / Vol 27 No. 11)
At Home by Bill Bryson (2010)
I read once that Terry Deary (author of Horrible Histories) employed a team of researchers to find interesting facts, which he would then combine into books. I don't know how Bill Bryson works but given the "select" bibliography at the back - which is 26 pages long and contains over 500 books - I assume he does the same. The result is a loosely themed collection of always interesting and occasionally fascinating bits and pieces of information (I've been quoting them at people for days), but one that nevertheless feels like the information is driving the book rather than the other way round.
The Week (16 July 2016 / Issue 1082)
Apollo 13 by Jim Lovell & Jeffrey Kluger (1994)
Brilliant telling of the Apollo 13 story, which, by having a clear narrative arc, manages to bring in lots of other information about Apollo and NASA without being dull.
The Week (23 July 2016 / Issue 1083)
Guitarist (Summer 2016 / Issue 410)
The Week (30 July 2016 / Issue 1084)
Bread Matters: Why and How to Make Your Own by Andrew Whitley (2009)