The Voice Of Frank Sinatra 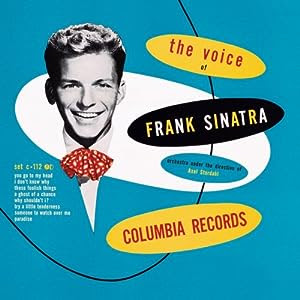 The first concept album? Certainly the only album I own that was originally released as a literal album - a collection of four 78 rpm records (with one song on each side of a disc).

Two things struck me about this album. Firstly, I was surprised to find that Sinatra - who I think of as a fat old man singing slightly flat - was recording as early as 1946. Seeing him as a much younger man in the pictures on this album is jarring. Secondly, it includes a version of "Try A Little Tenderness", a song that, in my ignorance, I assumed was first sung by Otis Redding. So I'm learning interesting things already.

To say that the music sounds dated is to miss the point. It was recorded sixty-five years ago. Those thin, scratchy strings were recorded with state-of-the-art technology. What hasn't dated is Sinatra's voice. Lighter and higher than it became later, it's still marvellously controlled and already has that distinctive ability to come in just under the note.

The songs are all very down-tempo romantic ballads. "Someone To Watch Over Me" is a beautiful song, sung beautifully. The aforementioned "Try A Little Tenderness" sounds strange as a traditional ballad - probably as odd as Otis Redding's version sounded to those who knew this version. Taken all together - and particularly with the ten bonus tracks supplementing the eight that made up the original album - it's a bit too cloying for me. Taken individually, the performances are all very good.
More pointless drivel from mark