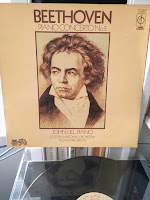 I was initially at a bit of a loss for what say about this. It sounds like quintessential "classical music" to my uneducated ear: lots of orchestral play, pianist whizzing up and down the keyboard. I think partly this is because I don't really understand the concerto form, but partly because there is just a lot of music here, a lot of thematic development, which if I am not listening carefully tends to all sort of merge together, leaving a generic "sound of orchestra playing some classical music" impression on me.

Obviously this is just my ignorance, since firstly, this is Beethoven and therefore clearly not just "generic"; and secondly, if I do listen carefully, I do actually hear repeated ideas. It's just that I'm not used to listening for them in this way - and maybe a little that I don't find them distinctive enough to notice them the second or third time round.

Anyway, the opening theme (or "riff" as I kind of think of it) is stated quite clearly by the orchestra right at the beginning, and we keep hearing it throughout the long first movement. In fact the first movement has several sections by itself (mini-movements?), and the piano and orchestra keep coming back to that opening riff theme, apart from during a fairly long cadenza (which is basically classical music speak for "solo", it turns out), which I personally could do without, since the sound of the piano by itself is a bit underwhelming.

And that's true in general: the best parts are where the orchestra and the piano are playing off each other, echoing what is played or supporting. I prefer the first and third movements (cadenzas notwithstanding), because they have the biggest and most dramatic passages. The second movement is a lot slower and quieter and less interesting.

As an aside, this is probably the dustiest record I've listened to so far, which means it was probably played quite a bit - which is nice to know. (And when I say dusty, I don't mean it was covered, or indeed obviously dirty at all, but the needle picked up quite a bit every time I played this, which needed cleaning off otherwise the sound started getting all distorted).