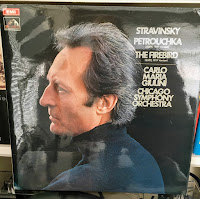 Stravinsky's The Rites Of Spring is one of the few classical pieces I've known and been a fan of since my teens, but I'd never listened at any length to any other of his works.

These two pieces were originally conceived as ballet scores. While I can tell that they would provide suitably dramatic counterpoint to a story being told in a ballet, without the dancing in front of me, the music itself feels like it jumps from mood to mood with no reason. I've never seen the ballets (it's a form of artistic expression that leaves me bewildered and nonplussed) but I can kind of imagine a narrative that goes with each piece. The notes on the back of the sleeve give a quick summary of the stories, which helps a bit.

The music itself is fantastically scored and very effective at invoking moods, but so far I have failed to detect any recurring themes to hang on to. And without these, or the dancing, the music runs the risk of sounding like an empty exercise in instrumentation. Just like ballet seems to me to be an empty exercise in making dance shapes, I'm afraid.

This record took me two weeks, partly because I struggled to get into the music and partly because my record player was out of action for four days while I redecorated my study.