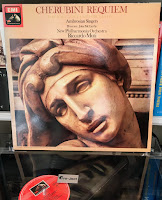 I'm really enjoying how varied this collection of music I've inherited is. Luigi Cherubini (great name) was Italian and much admired by Beethoven, among others, but isn't a composer I have ever heard of - although in fairness, perhaps this isn't saying much; I hadn't heard of three of the four composers on last week's record either. This piece is a requiem and according to the blurb on the back cover, written to be performed at the composer's own funeral and in response to an earlier composition of his being banned in church on account of featuring (gasp!) female voices; as a result, this has only male voices.

The sound of a chorus of people singing is a uniquely affecting sound, whether they are singing softly or loudly. The fact of the religious setting is largely immaterial, since I have no idea what they're singing, and all I know is it makes for some very dramatic music. I suppose that this is a piece of music for a funeral makes sense; it does, by and large, sound very sombre, particularly at the beginning and end, which makes for a nice sense of closure.

What it doesn't make for is a particularly relaxing listen though - some of the sudden bursts of sound from the orchestra and chorus combined have made me jump. I can't help but feel that this would have made for a very long funeral service - but as a piece of (effectively secular) music, it's very impressive. In some ways, a week isn't enough to get to grips with all of it, sadly.