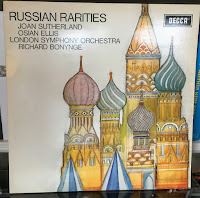 The first side of this record is Reinhold Glière's Concerto For Harp And Orchestra (Op.74). The combination of harp and orchestra is an unusual one (in my huge experience) and it only partially works. The harp is a beautiful-sounding instrument but it has a limited range of expression: it can't sound urgent, powerful or in fact much else other calm and tranquil, even when it's being played urgently (or indeed powerfully). That means the slower, second movement here (Tema Con Variazioni (Andante)) is more successful than the first and third, in which the harp is sometimes in danger of being over-powered by the orchestra. The music is pleasant enough but hasn't lodged in my memory.

The second side is more memorable, but generally not for the right reasons. The four pieces all include Joan Sutherland singing, in the first two without words. This has given me the opportunity to learn that coloratura is not my cup of tea.

In particular, Glière's Concerto For Coloratura And Orchestra (Op.82) is hard work, despite including some pretty melodies and some very clever interplay between the voice and orchestra in the second movement, because the style of voice is one I find so off-putting. I wasn't sure if this was just Joan Sutherland's particular style (I'm told that singing styles have changed between the then and now) so I listened to some more recent recordings of the piece and while they are not quite as frilly, it's still not something I'd choose to listen to. This isn't to take anything away from Sutherland, who sounds amazing.