Gervase de Peyer with members of the Melos Ensemble 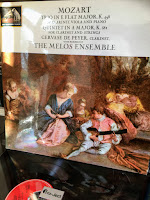 At first I found both of these pieces rather light and possibly even a bit twee, by comparison with the full orchestra compositions I'd been listening to so far for VAW. But they've grown on me - I've even come to prefer the trio (side A) over the quintet (side B).

The trio is known as the Kegelstatt Trio and my guess (even before I read the Wikipedia article) was that the unusual combination of instruments - clarinet, viola and piano - might indicate that it was composed for a specific combination of people, or maybe even as an exercise for a student. Apparently both of these guesses are true, probably (good for me!). It's a pretty, light piece, with enough melody and movement to entertain and keep interest up. After a few listens, I found myself humming along, so even though I don't think I could recognise it out of context, it's enjoyable.

The second side has the Stadler Quintet, composed for and first performed by clarinettist Anton Sadler, who was also part of the first performance of the Kegelstatt Trio - hence the combination of pieces on this record, I suppose. The orchestration is slightly fuller and so there's more going on, which is maybe why I remember it slightly less. But again, it's an attractive, undemanding piece.

I haven't been commenting on the quality of the performances in these blogs - I don't have the knowledge or experience to do so, and in any case, to be worth committing to vinyl requires a minimum standard. It sounds good to me, and a good recording too.