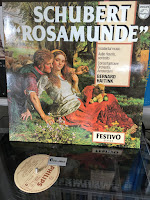 Apparently this was composed as accompaniment for a now largely forgotten play concerning an heiress to the throne of Cyprus who is raised incognito as a shepherdess. It's impossible to assess whether the score matches the play, but there's plenty of drama in the music here - even just in the Overture, which ranges across grand orchestral stabs to bouncy tunes, all in about five minutes. The sleeve notes say that the most well-known pieces are both on the second side, those being "Entr'acte 3" and "Ballet Music No. 2" but neither of them ring any bells, so I don't think I've heard them before.

There's a bit of singing: the individual contralto (Aafje Heynis) is a bit too frilly for my taste, but the chorus sounds great - so far, both of the albums I've listened to have choruses on them and I like it; they sound so big and powerful. Overall, it feels like it wanders around a lot, thematically, without ever settling down to a direction. But it's nicely scored and played and is excellent Sunday morning music.

As an aside, I rather like the picture on the cover (Holman Hunt's The Hireling Shepherd), in which a wonderfully skeptical-looking young woman is being courted by (presumably) a shepherd. Given that the play is about a cypriot princess, the only relevance it has is that it involves sheep, but never mind!