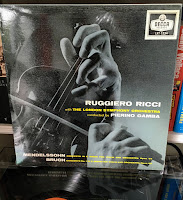 Despite playing the guitar I have little interest in very "technical" guitar music that feels like a demonstration of technique over taste, and initally these two violin concertos seemed it belong in a similar category. Every possible way of playing the violin seems to be used, possibly just because it can be.

But they've grown on me, not least because they both have actual tunes. I'm probably being very gauche by calling them tunes when they're more properly called "themes" or something, but if you can sing along with it, it's a tune as far as I'm concerned!

Wikipedia says that Mendelssohn's violin concerto is one of the most popular violin pieces in history, as well as one of the most technically demanding. I can see why it's so popular, as it's very dramatic and I'm sure that in performance, the soloist can make the most of all the opportunities to show off. Sometimes it seems like it's a little unnecessary, but there's a lot in there and I think I'd need more listens.

The same can all be said of Bruch's violin concerto also, which feels like, at heart, a very similar piece of music, certainly structurally. Maybe all violin concertos are similar in that sense though, although reading up about it, apparently Bruch was heavily influenced by the earlier work.

I've enjoyed both pieces and - thanks to those tunes - I might even recognise them out of context if I was to hear them again. However, these particular recordings do illustrate the downside of having old vinyl; despite being in amazing condition for a record that is over sixty years old, the recording and transcribing technology of the time (particularly in mono) leave this sounding a bit like film music from old black and white films. This is probably not helped by the (melo)dramatic nature of the first movement of the Mendelssohn concerto in particular. So even though this is on Wikipedia's list as a notable/award-winning recording, I'd want to hear a more recent version.

EDIT: having now heard a couple of more newer recordings, this stands up surprisingly well. Ricci's playing is, I think, more vibrato-laden than modern technique would call for, but actually I quite like this and it suits the music.