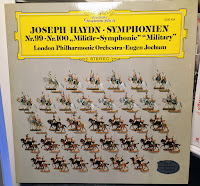 My Album of the "Week" has fallen behind a little recently, what with holidays and so on - but mainly because I couldn't really get a handle on these symphonies. Which is odd, because they are choc-full of nice orchestration and pretty melodies, most of which I can now hum along with (although I couldn't, out of context). I realised that I was trying to find some overall theme or meaning for the pieces, which is unreasonable, since I wouldn't necessarily expect the same from a pop or rock album.

Considered then as a collection of bits of music - albeit complex, intertwined and linked - it's been easier for me to get my head around. There are many different moods evoked, the transitions are superbly done and it's never less than very listenable. However, I'd be hard-pressed to pick out any stand-out moments. I think I prefer Symphony 100 slightly over 99, but sadly it all fades into the background a bit unless I am really concentrating. All of which sounds like damning with faint praise, I know, but I do actually like these pieces. Probably I am still unable to fully appreciate this kind of music.

Disappointingly, I haven't been able to listen to the vinyl of this, since it is very dirty and distorting unpleasantly (hopefully it's the record and not my needle ...). However, I found what appears to be the exact recordings on Spotify, so that's what I've been playing.