The Best of Nat King Cole 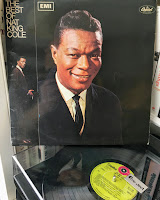 The next random selection managed to pick out one of the few "pop" records in my grandparent's collection. This was obviously a popular choice in their househould, as it showed signs of being played a fair amount - the cover is well used and the record itself, while in good condition, wasn't particularly clean (I'm fairly certain there were some bits of chocolate on it).

It's nice to have short, easily digestible songs, and while some are very much of their time ("Those Lazy Hazy Crazy Days of Summer" has some particularly cringe-inducing lyrics to modern ears), they all sound pleasant. I was familiar with about half of the songs on this album - the timeless classics such as "Unforgettable" of course - but it's been nice to hear others. Tracks like "I Don't Want to be Hurt Anymore" or "Dear Lonely Hearts" sound almost country; "L-O-V-E" is as swinging as anything Sinatra has recorded (it's interesting to note that both singers worked with the same arrangers, such as Nelson Riddle).

I have a particular fondness for "Let There Be Love", as I think my parents had this on 45 and I must have been hearing it since my teens. Cole's voice is remarkably consistent across all these songs - perhaps he doesn't have the range of a Frank Sinatra, but his vocal quality is of course unique and instantly identifiable. Easy listening in the very best sense.

[side note: I'm cheating a bit again, as my record player is still playing up, so I mostly listened to this on Spotify. I'm a bit disappointed - I really wanted to be playing the actual discs - but I wanted to carry on with the listening anyway]