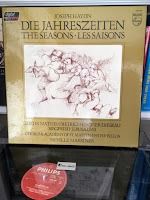 This is my first Vinyl Album of the Week™ and I probably could have picked something easier to start with. What I know about classical music is whatever is in Bluff Your Way In Music, minus the bits I've forgotten. What I know about classical music that features singing is even less, because having been immersed in pop and rock for so long, I find operatic-style voices overly mannered and fake.

So this three disc set of Haydn's Die Jahreszeiten (The Seasons) - a secular oratorio (it says here) - was always going to be a bit of a slog for me. But actually, it hasn't been at all. For some reason - maybe the novelty of the music, or that of having a shiny new turntable to play with - I've really enjoyed putting this on most mornings. Something about the grand, sweeping orchestration and the rich, resonant voices seems to suit my breakfast and morning cup of tea very well. I don't know, maybe it subliminally reminds me of mornings with my Dad, who would usually have Radio 3 on over breakfast.

Figuring out what part is actually playing at any given moment is a little tricky, as there is no track listing apart from on the record labels themselves, which, inconveniently, are spinning round and round at the exact moment I want to know what I am listening to. There is a very nice, twenty page booklet the same size as the box (i.e. 12") which has all the words and (if you look carefully) a note about what side each "song" (?) is on. So actually, my reference has been Discogs.

So, I can tell you that I like the Overture at the very beginning: very grand and stirring; and the combined might of the orchestra and chorus at the end of Freudenlied ("Joy Song", part of "Summer", end of side 2) has a magnificent power to it. However, it's a lot of music to listen to and I'm still taking it in, so I couldn't name any more moments yet. No melodies stand out; perhaps this is a lack of familiarity with the genre as much as anything else (Haydn doesn't seem to go for verse/chorus structures much ...) and while much of the music is very well done, it seems perhaps a touch "generic classical". That said, it was first performed in 1801 so maybe it started here, I dunno.

Obviously I can't comment on the performance itself, except to say that it seems very good. Given that it's available on Spotify, it probably says something about it. The vinyl I have is spotless; I wonder how much it was even played?