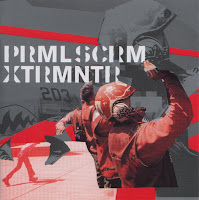 Primal Scream are the chamaeleons of indie rock. Is there a band that can claim the same range, from blissed-out baggy on "Higher Than The Sun" and "Loaded" to brain-melting trance with "Swastika Eyes"? Probably not. Unfortunately, neither can Primal Scream. Their only musical successes are due to having the foresight or luck to choose capable collaborators, and the wisdom to then leave them alone to do what they do best. On their own, Primal Scream revert to a cartoon caricature of a "rock band", complete with parody "attitude", and playing bad rip-offs of early seventies Stones - apparently unaware that the Stones have reserved that right to themselves for many decades now.

I first heard "Shoot Speed / Kill Light" over a pint in The Jekyll & Hyde in Edinburgh, when my friend Keith fished a Walkman out of the depths of his coat and told me, "You'll love this." (Keith, a man with impeccable taste in music, never despaired of improving mine.) He didn't tell me who it was. My first impression was that it sounded like New Order abusing My Bloody Valentine in a Glasgow fetish dungeon. As it turned out, I wasn't far wrong. Recruited for the XTRMNTR album, MBV guitarist and sonic guru Kevin Shields was joined for this track by Bernard Sumner. Whither Primal Scream? I can't hear any evidence that they played on the track, nor are they missed.

The track is superb, a howling, screaming collision of krautrock, Hawkwind and techno, with a classic New Order bass line (presumably played by Mani. I suppose), gusts of patented squawling Shields guitar, topped off with a minimal, heavily processed, vocoder lyric that just recites the title over and over. It is utterly compelling, hypnotic and driven. It's also pretty much unlike anything else on the album.

The rest of XTRMNTR is patchy: "Swastika Eyes" is excellent (in both versions, although I prefer the Jagz Kooner mix), and "Blood Money" is a fun combination of John Barry, sub-Coltrane free jazz and Neu, but too much of the rest is just their default sub-Stones riffage played while doing a Stars In Their Eyes take on The Stooges or MC5. And Bobby Gillespie's voice is probably the most annoying in rock. Yes, even more than Bob Dylan's.


Back to the complete Best Tracks of the Noughties.
More pointless drivel from mark

Stored in the circular file under music, noughties, review