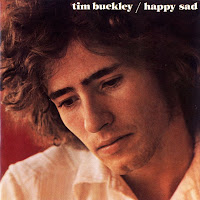 Almost twenty years ago I came across Jeff Buckley's incomparable Grace in a secondhand record shop in Manchester and it's been one of my favourite albums ever since. Inevitably, any fan of Jeff is going to want to hear more, and that is bound to lead to his father Tim. The result is that I now have quite a few more albums by Buckley Senior than by Buckley Junior; the irony is that, so far, I've never really connected with any of them. I quite like Sefronia (which includes "Dolphins", my favourite Tim Buckley song so far) but that's about it.

Happy Sad is from a few years earlier and I think the most I can say about it is, again, I quite like it. Not loads, just some. As a whole, is has a lazy, hazy late-summer, late-sixties feel which I find appealing. Although notionally "folky" and primarily based on acoustic instruments, it has electric touches here and there, and there's a jazzy influence hovering over most of the tracks too. It's only six songs long, although two of them are over 10 minutes long, so it isn't a short record.

If I had to choose a favourite, it would be "Love From Room 109 At The Islander (On Pacific Coast Highway)", which is a deliciously languorous, melancholic lament for a lost love. I also like the opener, "Strange Feelin'" which reminds me oddly of the "Stairway To Heaven" theme from A Matter Of Life And Death, while "Buzzin' Fly" has a nice little rhythm going. Unfortunately, "Gypsy Woman" is grossly over-indulgent and, at 12 minutes long, dominates and spoils the album for me.

All in all, another mixed bag as far as I'm concerned.
More pointless drivel from mark