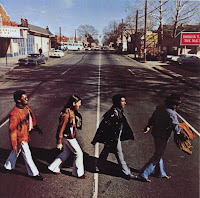 This is a bit of an oddity. An album consisting entirely of the songs from Abbey Road, all done as instrumentals (bar the fifteen words of "The End") and covered in a wonderfully cool and relaxed way. Nowadays it would be a tribute to a classic album, but since this was recorded barely six months after The Beatles released the original, this was perhaps a sign of a lack of inspiration?

It's organised as three medleys, not in the original order of songs at all, apart from "Something" which is for reason given its own track. It's lovely, smooth background music, beautifully played and gently funky, if occasionally a bit too lounge - probably because the organ is just that kind of sound - but no less enjoyable for that. If it lacks some of the brilliance and force of the originals, perhaps that's just an indication of how good the original album is.
More pointless drivel from mark