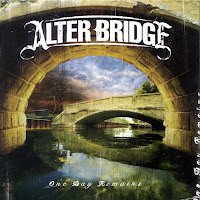 Last year, one of my most played albums was Blackbird, Alter Bridge's second album (I think accepted critical practice is to describe it as their "sophomore effort", but I eschew such pretension). On the strength of that, I decided to give this, their debut, a try. Given the reputation of Creed and Mark Tremonti, I had expected it to be full of pedal-to-the-metal, foot-on-the-monitor rawk; hair flying, guitars crunching, voices shrieking and solos shredding and squealing.

There's some of that in evidence, the title track being a particularly enjoyable example, while "Metalingus", unsurprisingly, has some nicely muscular guitar action. However, the album overall is mostly one of two speeds - full volume, albeit mid-paced, stadium-friendly rock like "Open Your Eyes", and hand-wringing balladry, such as "Broken Wings". Some of the songs combine both, using the classic template of a quiet start with loud chorus ("Shed My Skin" is probably my favourite of these).

Myles Kennedy has a classic rock voice that works better at lower registers than the excruciating screech of Bruce Dickenson or balls-in-a-vice squeak of Waxl, and therefore lends itself to the ballads. However, it does get a bit doomy and depressive at this speed ("In Loving Memory" in particular, which is no doubt heartfelt but also downright maudlin). Guitar work throughout is an exemplar demonstration of modern rock technique and feel, while particular mention should be made of the drumming which is outstanding throughout and has me thumping in time on my desk, leg, head or anything else close to hand.

On the whole, it's a good album, albeit not quite up to the standard of Blackbird. The songs aren't quite as memorable, the recording quality and production a touch muddier and the clichés slightly more in evidence.
More pointless drivel from mark