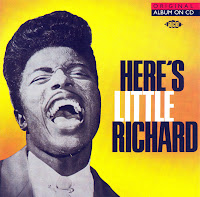 So far, I've found the classic rock 'n' roll albums from the fifties to be somewhat disappointing. They're so obviously of their time; what sounded so different and revolutionary sixty years ago has been rendered mainstream by their very success and our over-familiarity with the material. Elvis's classic first album for RCA sounds very pedestrian to me, Buddy Holly's is scarcely less so and Fats Domino's This Is Fats is just a little boring.

So it's a delight to find that Here's Little Richard is excellent. The amount of energy he displays in most of the tracks is amazing and his voice is astonishing - and if it sounds so to me now, I can't begin to imagine how alien it sounded at the time. It's also good to find that, as well as the inevitable classics like "Tutti Frutti" and "Long Tall Sally", there are other good album tracks. "Baby" is raw, raucous R&B in which Little Richard sounds almost feminine. "Slippin' And Slidin'" is jumping, good time rock 'n' roll with a great sax solo. "Can't Believe You Wanna Leave" is slower but just as effective.

There's not a lot of variety; it's all fifties R&B and owes a lot to many, including Fats Domino. But Little Richard's energy is irrepressible and his voice is fantastic. Definitely a classic.
More pointless drivel from mark