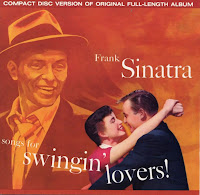 Right here is where Sinatra cements his reputation and formulates his signature clichés, both of which would sustain him for the rest of his life. "You Make Me Feel So Young", which starts the album with a blast of brass, swings so irresistibly that your fingers start clicking automatically, while Frank booms his through words like "moon" and "balloon". And here's possibly the definitive performance of "I've Got You Under My Skin"; starting with quietly honking sax and building in shrillness and intensity to a fever pitch before fading back down right at the end. The classic Sinatra arrangement.

Listening to this straight after In The Wee Small Hours, it sounds very much like an attempt to reproduce the concept of the earlier album - except that instead of losers in love, this is for winners. As a result, it is a much brasher, less subtle affair. It is also a less consistently-themed whole, but the famous songs - including those mentioned above, along with "It Happened In Monterey", and "Makin' Whoopie" (an entire song about sex! In the fifties!) - are so well-known that this is probably the more famous album. I think that's a shame.

Not that this isn't also excellent, but repetition of the same clichés spoils it a touch. The way that Sinatra slides up to notes is uniquely his, of course, but he does it so much - and clearly deliberately, because it's not hard to hear that he can hit a note dead on when he wants - and with such foghorn-like tonality, that it does start to wear thin. He sounds strained when going for the big notes and the joviality can sound forced. I think he's much better at quiet songs.
More pointless drivel from mark