In The Wee Small Hours 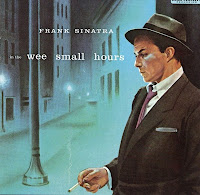 The first concept album? Given what we now understand by the term, this doesn't really qualify. It doesn't even have a cover by Roger Dean, for goodness' sake, just a slightly odd painting of Frank looking lonely (although the picture did inspire a legendary advertising campaign, all by itself). It is, however, a wonderfully moody set of performances, which rather than having a little bit of everything for everyone, concentrates on the mournful. So there's a definite theme.

My guess is that something so downcast, without a sprinkling of livelier numbers, could only have been attempted by someone with Sinatra's commercial and artistic clout. It's unusual now and probably was at the time, men preferring to leave lovelorn ballads to women. Alpha males don't like giving the impression of vulnerability or of having been cast aside by a girl.

Full marks to all concerned then, because it is superb. Sustaining a melancholy mood without boring the listener must be a difficult trick; here the arrangements provide enough light and shade while leaving the vocals centre stage. And Sinatra is uniquely identifiable, of course, the sonorous, dolorous richness of his voice suiting the material perfectly. Somehow the album never drags, even though it is fifty minutes long and contains sixteen tracks.

It is a very solitary pleasure though. I can't really imagine having this on in the background while friends are over. Luckily I listen to a lot of music by myself. The tracks I'll come back to in particular would be "What Is This Thing Called Love", "When Your Lover Has Gone" and "This Love Of Mine", but really the album needs to be listened to as a whole. So maybe it does qualify as a concept album after all.
More pointless drivel from mark

Stored in the circular file under 1001 albums, music, review