The Genius Of Ray Charles 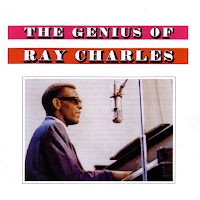 I can't think of a better start to an album than "Let The Good Times Roll" - horns blaring, bass and drums swinging. OK, it's a straight copy of the Louis Jordan original but it is better recorded and performed, to my mind.

The rest of the album is a tiny bit of a let down after such an outstanding start. It consists primarily of standards and was presumably intended to showcase Charles' ability as a singer and interpreter of acceptable tunes. My guess is that, by the standards of the day, this was the best option in order to ensure a career in music. Rock 'n' roll was barely a toddler and the soul music that Ray Charles pioneered wasn't even out of nappies (metaphor being stretched). No-one expected that there was money to be made in these new forms of music. But a black Sinatra - Nat King Cole notwithstanding - well, there was mileage in that. Hence the choice of songs and the overblown album title.

That's not to say that it's not a very good album or that there aren't other excellent tracks on here. "Deed I Do" and "Alexander's Ragtime Band" are both very good. Both are from the first side of the album. The second half - side - is a bit syrupy, laden as it is with strings. But still, "Don't Let The Sun Catch You Crying" is very good - not for the arrangement so much as the singing, which is sublime.
More pointless drivel from mark