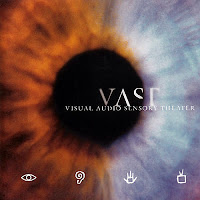 I came across VAST in 2000, when I bought their single "Free" for no reason other than it was cheap. At the time I was working in Edinburgh, and it became a regular Monday lunchtime activity, often with my new friend Keith, to wander down to the big HMV on Princes Street, see what new singles were on offer, and maybe take a bit of a punt on a few singles unknown (to me) that were only a pound or two.

The success rate was surprisingly high; via this method I came across a number of gems I wouldn't have heard otherwise, such as "Anorak Lou" by Genelab, Bush's "The Chemicals Between Us", "It's A Girl Thing" by My Life Story, "Miss Parker" by Morgan, "Sweet Sensation" by Shaboom ... I could go on. "Free" was one of these on-spec purchases, but for some reason, despite loving the single (it's in my "Best Of The Noughties" run down), I didn't follow up by buying the parent album, Music For People, for over ten years.

This isn't that album. Visual Audio Sensory Theater (crap title, sorry guys) is VAST's first and I thought this would be the better place to start. I'll get on Music For People soon, but on the first few listens, I prefer this. Much of the album is good, solid techno-rock, sounding a bit like a rock version of Moby's Play. One of the other things that I'm reminded of is Enigma's "Sadeness (Part 1)", with a similar looped, heavily reverbed monk chant type of thing running through all chord changes. It's pretty effective but possibly over-used.

A better use of the same concept occurs in my favourite songs, "Touched", "Dirty Hole" and "Pretty When You Cry", which all have a eastern-sounding vocal riffs running all the way through, and some nicely crunchy guitars layered on top. In general, the album's at its best when its the guitars are on eleven and the pace is upped.

Lyrically - not that I pay much attention to this aspect - it seems all a bit anguished. "I'm Dying" is fairly easy to understand; "How many men have died in your dirty hole?" (from, er, "Dirty Hole") is interpretable a few ways but none are very cheery. Still, no matter, the music is good enough for me. Enjoyable rocky, although none of it as good as "Free".
More pointless drivel from mark