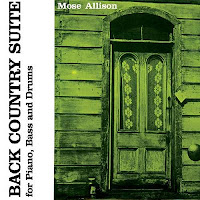 Polite, white jazz-blues that enjoyed a surprising following amongst sixties rockers, The Who going so far as to include a cover of "Blues" (as "Young Man Blues") on Live At Leeds. Why this should be so is less than clear to me. The music is uninspiring and pedestrian and Mose Allison's voice is, well, polite and white; fey, body-less and bordering on anodyne.

"In Salah", singled out in reviews I've read for particular attention, sounds to me like a dead ringer for "A Night In Tunisia". The album as a whole is very much of its time; pleasant enough in the background and is nicely short at a touch over half an hour.

Once again, as I have found with albums of a similar age by Fats Domino and Elvis Presley, what this album represents is historical value; it was ground-breaking; it now is run-of-the-mill. If it took a white man to impart a "respectability" that was perceived to be lacking in the music performed by black musicians for a decade or two, then great. But on its own merits, in the 21st century, it's distinctly unimpressive.
More pointless drivel from mark