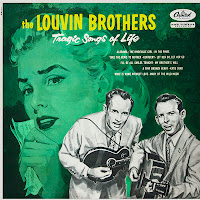 Apparently this is a pioneering work in the country and bluegrass category, but I found it something of an acquired taste. I can see the appeal; the voices are clear (if somewhat nasal), the harmonies pretty, the music upbeat and cheerful. The lyrics, on the other hand, are unremittingly depressing - although the album's title does offer a bit of a clue here, to be fair.

Some are just maudlin. "Kentucky" seems like a cheerful ode the beauties of, well, Kentucky, until you realise it's about dying. "I'll Be All Smiles Tonight" is a curiosity that wouldn't happen today, I think. It's written from the perspective of a woman, who is watching the man she loves marry another. More to the point, it's sung from that perspective. Which makes it sound like the Louvin Brothers are gay. Whether they were or not is irrelevant, it just seems out of character for a very traditional genre.

Some songs are darker. "Knoxville Girl" is particularly unpleasant, describing as it does, in gruesome and extended first person detail, how a man murdered the girl he loved, although at no point does it offer an explanation. All this is set to a jaunty bluegrass beat and tune. Why this was considered suitable or even desirable subject material is beyond me, but clearly it has been very influential.

This isn't something I'd listen to regularly, or even ever again, to be honest. It sounds nice enough, but as soon as you start listening to the lyrics, it's really depressing - both because of the subject matter and that some people actually (presumably) enjoy such subjects. I'm pleased I know it but off it goes!
More pointless drivel from mark