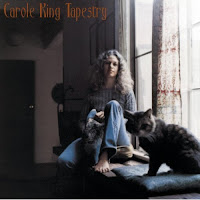 As well as being another on the list of 1001 Albums (tick!), this was a favourite of an old friend of mine with whom I have since lost touch (i.e. I got fed up with being the one who always called him). Despite this, and it being widely recognised as a classic, I've never really been motivated to seek it out.

Coming to it now, the initial listens felt very unbalanced; four of the tracks are very well known while the rest are completely new to me. However, several runs through sorted this out and the whole record is a pleasing, consistent whole, both thematically (with one exception) and in sound.

The outstanding tracks are, inevitably, the famous ones. "It's Too Late" and "You've Got A Friend" are lessons in the strength of simplicity - of sentiment, of melody and of arrangement. The same approach gives a interestingly different interpretation of "Will You Love Me Tomorrow"; The Shirelles' original sounds like a nervous teen worried that her boyfriend will still respect her in the morning, while the version here is an adult woman concerned about the next few decades.

The less known tracks are also enjoyable, particularly "So Far Away" and "Way Over Yonder".  The only track that grates at all is "Smackwater Jack", which seems out of place - not stylistically but thematically, not being about personal feelings.

The sound mix on my CD (which was secondhand and is probably the original CD release and not the newer "Legacy" edition) is a little muffled, which makes some of the drums, particularly, distracting on, say "So Far Away" (or maybe it's just my AKG headphones which are admitedly quite bass-heavy).

I'm glad to make this album's acquaintance now - a very pleasant album that will no doubt hit the spot on occasion.