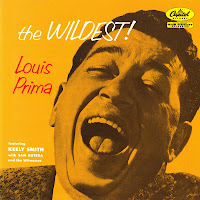 It's difficult to know how to classify this album. It's a real curiosity. There's some jazz, some blues, some standards, some Jordan-esque boogie. It all begins to make a bit more sense when you learn that Prima was always an inveterate entertainer and, at the time of this recording, was playing nightly in one of the biggest venues in Las Vegas. So the mix is representative of a show band at the peak of its powers - something for everyone, we're here all week, try the veal.

There's a real sense of energy and humour running through the whole thing. Most indicative of this is the track "Just A Gigolo/I Ain't Got Nobody", later covered pretty much note-for-note by Dave Lee Roth and suiting his party animal image perfectly. Not bad for a (then) thirty year old recording of a sixty year old tune. But there's plenty of other things to enjoy. The standard "Body And Soul" starts straight but appears to be derailed and starts speeding up more and more, before crashing to a halt and resuming at a more sedate speed. Well, I find it amusing and I think it's supposed to funny.

Other picks would be "Jump, Jive An' Wail" which I thought could easily be a Louis Jordan song but is a Prima original, and "(I'll Be Glad When You're Dead) You Rascal You", which is fun. And that's the feel of the whole album - fun. Prima's a decent trumpeter, distinctive singer (he sang "I Wan'na Be Like You" in The Jungle Book) and excellent entertainer. Again - not what I expected from the fifties.
More pointless drivel from mark