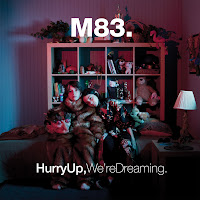 Why carry on listening to new music? I've got so much, I've got firm favourites that, at my age, are unlikely to become displaced by anything new. Is anything ever going to match the stripped down, oiled up elegance of Depeche Mode's "Enjoy The Silence", or the compressed punch of QOTSA's "First It Giveth"? I highly doubt it. So what's the point?

Well, I enjoy tracing the influences down the decades, listening to how innovations get adopted and adapted, subverted and perverted down the years. I like understanding what floated the boats of previous generations. I want to try and hear what other people hear when they acclaim a classic. I get a kick out of being a trainspotter about the production details.

But actually, all this just time filler. The real reason I listen to new music is because, once in a blue moon, some combination of factors gels perfectly and knocks me out. For a day, a week, that track becomes all I want to hear. When this happens, it makes all the gold panning worthwhile.

Such a track is "Midnight City". I heard it for the first time less than a week ago. It is now the song I've listened to the most number of times over the last 12 months. (I'm can't be the only person doing this, either: it has significantly more plays than any other M83 track on last.fm.)  It's a fantastic collision of The Human League recast as stadium rock and Flesh And Blood-era Roxy Music as covered by My Bloody Valentine. It contains wonderfully crunchy, analog square wave synthery and a two note riff that sounds likes it's being played by an hysterical gnome, all drenched in M83's trademark OTT reverb. And just to cap it all, it comes complete with a saxophone solo at the end that is So Eighties It Hurts.

In fact, the first three songs are all good; they are "Intro", "Midnight City" and "Reunion".  They alll stay close to the same template - you could say that M83 are formulaic and I wouldn't disagree, although luckily it's a formula I like. It's obviously indebted to the 80s; it's there in the nods to Hugh Padgham production sounds, or of Peter Gabriel on So. It reminds me in some respects of Neon Neon's Stainless Style, but instead of being a deliberate homage, it uses the influences as a jumping off point.

The keyboard sounds are immense, bigger even than my previous benchmark for high quality synth action, Will Gregory's on Goldfrapp's Supernature and Head First. There's a bit too much surface sizzle but it's so dazzling I don't mind the lack of depth. As well as "Midnight City", I also like "Claudia Lewis", which includes Tony Levin-esque bass slaps for added 80s flavour, on top of everything else; "Wait", a much slower version of the formula which builds very satisfyingly; and "Raconte/Moi Une Histoire" which is like M83 does Lemon Jelly.

All of the songs mentioned are from the first CD. The album is too long, as most double albums are (I can only think of three off the top of my head that don't need editing: London Calling, Out Of The Blue and Goodbye Yellow Brick Road) but overall, good. And worth the price of entry for "Midnight City".
More pointless drivel from mark