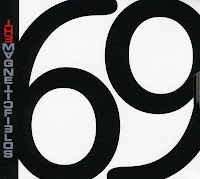 This was recommended to me by my friend Paul, and I can understand why he likes it. Paul is a firm subscriber to the "more is more" school of thought, a sentiment he clearly shares with The Magnetic Fields. Sixty-nine songs over three CDs requires a fair investment of time to give it a fair play, and I was a little concerned that it wouldn't be worth it - double albums are rarely without filler, let alone a triple one.

As it turns out, it's easy listening and hasn't needed many goes to get to grips with. Many of the songs are memorable after a couple of listens, and there's lots of good material here. However, it's still too long. There's enough filler to repair the whole field after a demolition derby. You could ditch a dozen songs without affecting the overall quality and still keep the needless consistency of equal numbers of tracks per CD.

My overall impression is of immaturity (69, hur hur) and lack of effort. It sounds like a collection of demos. Some of the songs are more complete than others, while some are barely more than sketches. The arrangements are all underdeveloped and amateurish too; for example, "Let's Pretend We're Bunny Rabbits" is almost, but not quite, like a Beach Boys song. With a bit more effort, it could have been a brilliant pastiche. As it is, it's gently amusing.  Too many of the lyrics are incomplete and apparently first drafts, and although there is plenty of clever clever word-play, there's also too much making-do with cliche, and jarring rhymes that sound like they're the first thing the writer thought of, and later used his cleverness to justify leaving rather than improving.

I haven't read any reviews, but no doubt someone, somewhere, has described this as The Magnetic Fields' "magnum opus". But I think this album is a wasted opportunity. With more effort and better quality control, the most cringe-worthy of the lyrics could be excised, the music vastly improved, the best bits combined and you could easily have two excellent, normal length (15 songs or so) albums.

As it is, you could make a decent single album with the best of the existing songs. Here's my track-listing for it:

In overall sound, much of it is strongly reminiscent of The Divine Comedy, largely because of Stephin Merrit's deep voice but also due to the wordiness and some of the arrangements. There is quite a lot of stylistic variety (albeit too much ukulele for comfort) and a number of different singers, which is just as well as Merrit's voice would be very tedious over this many tracks.

There are a few egregiously bad songs. "Love Is Like Jazz" is a single micro-joke extended for 3 mins and played by people who don't actually know or understand jazz. "Promises Of Eternity" has woefully weedy synthetic strings. "Punk Love" is a complete waste of time (and not very punk, either). "Experimental Music Love" is pointless, even as an art experiment.

So, overall, an interesting exercise, with much to recommend it but fatally flawed - confusing quantity with quality and the sanctity of inspiration with the need for hard work.

However, this doesn't seem to be the general opinion. This is a cult album and inspires a fair amount of misplaced devotion (I say misplaced because anyone describing 69 Love Songs as flawless - as one person does on last.fm - needs to get out of their little indie rut and listen to some real classics). There's a book explaining all the songs, a whole wiki dedicated to it, and a work-in-progress attempt to illustrate the whole thing (for which Paul has submitted one of the most inventive illustrations - yay Paul!).