Standing At The Sky's Edge 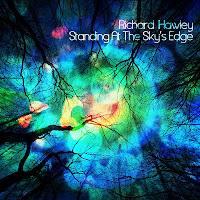 Some albums take time to really appreciate or understand, but some are very immediate. It only took a couple of listens to know that I wasn't going to listen to The Incredible String Band's pretentious nonsense again any time soon. And it only took one run through to know that I was going to love Richard Hawley's latest album.

I was always going to get his new album, regardless. After being five years late to Coles Corner, I've been making up for lost time and have been working my way through all his albums. I've yet to find one I don't like; his brand of deceptively simple song writing and marvellously restrained, slightly retro style has been a revelation. When I read that Standing At The Sky's Edge was something of a departure and he was going all psychedelic, well, I was intrigued. I immediately pre-ordered it on Amazon (this is before we found out they pay no tax, the gits).

It arrived a week ago and I've listened to it almost exclusively since. It is magnificent. The straightforward acoustic strums and clean, tasteful, reverb-laden solos on previous albums give way to a wall of sound and wailing guitars. There's a couple of beautiful, more reflective songs - although even these are decorated with lashings of echoing guitar - but most of the songs are rocking hard.

There are hints of many different influences but the mark of greatness is that although I can name some, I can't think of anything that sounds quite like this. There are definite hints of the more way-out end of Britpop; some Oasis perhaps (and in many respects this is the album Noel Gallagher has been trying - and failing - to make since 1995), Hurricane #1, Dark Star or The Music. But mostly, it is its own music.

All of the songs are excellent and, as Stuart Maconie said in a review in The Word, another sign of a great album is that different songs emerge as favourites over time. But three in particular have grabbed my attention.

"She Brings The Sunlight" is the first track and begins as a slow, dirge-like churn that breaks out the Beatle harmonies on the chorus before exploding with a fantastic, overdriven guitar solo laden with effects (wah-wah, phaser - or possibly a Lesley cabinet - and delay, to my ears). It's hypnotic and increasingly intense, leading up to an even better final solo that suddenly cuts off. I could have done with another several minutes of solo, but that's Richard Hawley - as much as the song needs and no more. Utterly fantastic. "Down In The Woods" is a driving, pounding rocker washed in washes of feedback and a solo that proves you don't need more than a few notes to achieve a memorable effect. And finally, "You Leave Your Body Behind You" is another rocker, a little softer this time.

Standing At The Sky's Edge is a proper guitar album, and I don't mean some guitar-wankery like Steve Vai or Joe Satriani. It literally has guitars all over it - other than the beautiful cover image, all the rest of the booklet's pictures are close-ups of vintage guitars. The variety of textures and sounds Richard Hawley (and his co-guitarist) creates is astonishing - and my point here is that this is what guitar virtuosity really is, not the ability to cram six bazillion notes into a solo. Having stunning songs helps too.

All in all - the kind of record that is the reason I still listen to new music. An instant classic.
More pointless drivel from mark