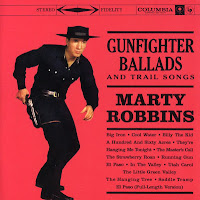 If I had to lay bets about the genre of music least likely to appeal to me, it would be country and western. Both kinds. And this album seems to embody all the aspects that irritate me: maudlin balladry, overwhelming sentimentality and an inexplicable obsession with a distant (and brief) period of history. Don't most people grow out of playing cowboys and indians by the time they're twelve?

So it comes as a complete surprise to me to find that I have heartily enjoyed this album. In fact it's probably my favourite so far of the albums from the fifties that I've listened to. I should learn to get over genre classifications. Or remind myself that, as Louis Armstrong said, there are only two types of music. This is the good kind.

My most common complaints about some of the music I've been listening to recently is the lack of proper tunes. This is not a charge you can level at Marty Robbins. Every single track here has a super, straight-forward, whistle-able tune that actually stays with you, accompanied by simple guitar, bass and drums. It might be simple but it is mightily effective.

Favourites? "Big Iron" starts the album and is a song of a ranger and an outlaw having a shoot out. The acoustic guitar strums in an insistent rhythm while the double bass thumps satisfyingly underneath it, while the story unfolds over it in a wonderfully singable tune. And so we find for the whole album. The songs are mostly stories: "El Paso" is the story of a man who kills and runs, but returns for his woman (and gets killed); "The Master's Call" tells of a boy who becomes an outlaw but is rescued by a vision of God, or Jesus, or something. All are blessed with superb melodies.

So, C&W, eh? Bring it on. Next stop: Hank Williams.
More pointless drivel from mark