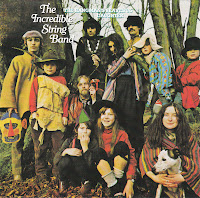 I wish I'd heard this album when I was 18. I would probably have been impressed with it: the brave exploration of vocal microtones, pioneering extended song cycles, primitive instrumental skills on an eclectic variety of ethnic instruments, and existential lyrics (the hangman represents death and his daughter the afterlife, apparently) are all guaranteed to go down well with a young, impressionable, pretentious mind and a few joints.

However, with the benefit of age and a much broader musical experience, I now hear it differently: out-of-tune singing, an inability to write a simple, solid tune, inept musicianship and hippy babble. It really is painful to listen to.

I know I've said that some albums require several listens to really know, but I think it's fair to say that sometimes you just take an instant dislike to an album. I've listened to this about three times now and I'm very reluctant to inflict it on myself again.

It's very much of its time, a kind of acid-folk that reminds me, at its most whimsical, of the previous year's Piper At The Gates Of Dawn - albeit without the same knack for a tune or musicianship. There are echoes of other folk music, of course: parts of "A Very Cellular Song" remind me of Simon & Garfunkel's "A Simple Desultory Philippic", although the latter was intentionally amusing. And talking of comedy, are we absolutely sure that "The Minotaur's Song" is not actually Monty Python doing an early prototype of what became "The Lumberjack Song"? The only song I can vaguely stand is "Swift As The Wind" because it has a tune I like a bit. Only a bit though, and the title just reminds me of Spinal Tap ...

All in all, badly dated, hippy folk rubbish of historical interest only. Still, that's another one ticked off the 1001 Albums project.
More pointless drivel from mark