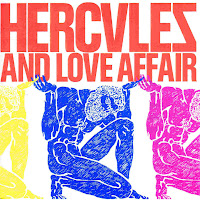 This is a curious mix of an album.  In too many respects, it's a fairly pedestrian modern disco (or would that be "nu-disco" these days?) collection, with some house flavours.  What occasionally raises it above also-ran status is the presence of Antony Hegarty on a few key tracks.

"Time Will" wouldn't sound out of place on I Am A Bird Now if the instrumentation was changed from the sequenced bass and drums arrangement.  It's a slow song that reminds me of some Zero 7 pieces - except for Antony's unique voice, which sounds far away from the identikit soul vocalists used elsewhere on the album.  He also does his best Sylvester diva turn on "Blind", a fantastic slice of disco which was the reason I bought this album (and which rockets in at #93 on my "Best Of The Noughties", fact fans!)

His wonderfully overwrought vocals on these two tracks make them really stand out and they are, by some distance, my favourites on the album.  Of the rest, only "Hercules Theme", a slice of mid-pace Philly soul, appeals at all.  The other tracks are OK, being a mix of some house-y, garage-y influences, and a couple of tracks that sound very like Remain In Light-era Talking Heads.  Overall, only really worth it for those two songs.
More pointless drivel from mark