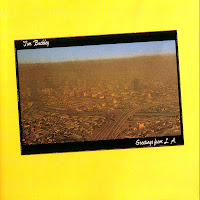 I bought this album on our shopping trip a while back, mainly because it's on the list of 1001 Albums You Must Hear Before You Die, which I am very slowly working my way through (although I'm a little out of sequence here, I haven't made it out of the fifties yet). There must be something special about it to warrant its presence in the book. Unfortunately, I can't figure out what it is.

It is quite a short album by modern standards, at just under 40 minutes - classic vinyl album length, of course, before all the extra bonus track nonsense afforded by CD - so I can listen to it twice on the way to work and twice again on the way back. I've done this for a few days now, so I think it's fair to say I've given it a good go.

Still, all I hear is perfectly pleasant seventies rock & soul. Even after a dozen listens, none of the tracks really stand out to me. I quite like the slower "Sweet Surrender" for its sense of late night regret, heavily effected rhythm guitar and strings, but that's about it. "Make It Right" is nice enough. Tim Buckley's voice is incredible, although I don't get any real sense that he's stretching it here. The instrumentation is pretty standard soul - swirling hammond organ, scratchy guitar, funky bass - but used to less effect than, say, Bowie's take on the same inspiration a few years later with Young Americans.

Overall, I'm not sure why I had to hear this album. Maybe it's just Tim Buckley - I've tried other albums of his and never really gelled with them. Oh well. Love the cover though.