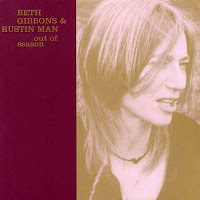 What attracted me to this album was not just Beth Gibbons' headline name, but the knowledge that Rustin Man is an alias for Paul Webb. "Who?" you may ask. Only the bass player for one of my favourite bands of all time - Talk Talk.

The short and lazy summary of this music would be that it sounds like a folky version of Portishead. But that's only by assuming the broadest sense of "folk music", that includes, say, Nick Drake and John Martyn, influences reflected in songs such as "Sand River" and "Drake" (the title's a bit of a give-away here). However, this categorisation doesn't give you a clue to songs such as "Tom The Model" or "Romance", which sound more rooted in the Bacharach & David classics of the sixties.
In some ways the overall feel is of a cross between Portishead and Talk Talk. That this should be is perhaps not as obvious as it might seem. It's generally acknowledged that from 1986's The Colour Of Spring, Talk Talk's sound was largely driven by Mark Hollis and Tim Friese-Green. However, Beth Gibbons has similarities in vocal style to Mark Hollis - that intimate, whispered, quite dry sound - and some instrumentation is the same - Lee Harris, Talk Talk's drummer appears, as does Mark Feltham, harmonica player to the stars and the man responsible for some remarkable solos on The Colour Of Spring.

My favourite song is "Show", in which Beth weaves plaintive verse, bridge and chorus melodies across the same, simple, unchanging four bar piano and double bass refrain. The aforementioned "Tom The Model" has a great chorus, and wouldn't be out of place on more recent retro-sixties efforts from the likes of Amy Winehouse. Overall, an enjoyable album and a worthy addition to the discographies of both Talk Talk and Portishead.