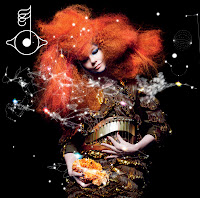 On first listen, I thought this was pretentious, arty nonsense. There are no obvious tunes, the instrumentation is mostly tinkly, plinky and irritating (although not as offensive as the unpleasant clouds of noxious drum 'n' bass farted randomly over several tracks) and Björk's unique vocal tics are as much to the fore as ever. Listening to her sing reminds me of a small child reading from a book; stopping at the end of every line, regardless of whether that is the end of a sentence or not.

Some of my favourite albums have needed several listens and while there's a place for music that has a real immediacy, it would be very tiring if no music had depth too. So I was determined to give it a chance, but I have to say I wasn't looking forward to listening to it again.

Having persevered, some tracks are beginning to lodge in my mind. "Cosmogony" is a sweet description of different creation stories with lovely backing from ethereal voices and what sounds like a muffled and heavily treated brass band - and benefits from a a discernible structure. "Thunderbolt" has some nice crunchy sounds and, again, a melody that you can remember.

However, too many of the tracks are kind of tone poems, the kind of songs that make me wonder how anyone remembered them long enough to record them. They sort of meander around but go nowhere.  There are plenty of very beautiful moments but only a couple that last more than a few bars. The introduction of what is apparently "breakcore" (honestly, ffs) into three of the songs is just horrible, inappropriate and unnecessary. And "Crystalline" contains the line "blinded by the light" which is unfortunate because it reminds me that music can be much better.

Obviously there's some sort of concept. Before I asked the interweb to teach me all about it, my impression was that it was the story of the development of life itself. "Biophilia" means love of life or of living things. Reading it up, there's all sorts of things going on and, in particular, the album is also available as an iOS app which visualizes it all for you.

As someone who owns no iThings (or has any current intention to), my question then is: does it work as music? Mostly, yes. Do I want to listen to it again? A couple of tracks, yes. Most of it, no. Overall, a disappointment.
More pointless drivel from mark