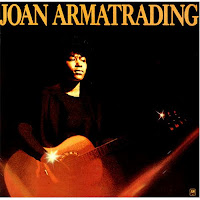 I've owned Track Record, Joan Armatrading's first "best of" collection from 1983, for a long time - in fact, I have it on vinyl, so it must be since the mid-eighties.  When I revived my record deck from its decade-long hibernation a couple of months ago, it was one of the first platters (as no-one actually says) that I played, and full of goodness it is too.

Thus inspired, when I found her first album second-hand on our shopping trip, I snapped it up.  It's a very nice album and definitely worth repeat listening.  I like the slower tracks better, which sound more delicate and better produced.  "Love And Affection" stands out, because you can't argue with its classic status.  But "Down To Zero" is excellent too, and I rather like "Somebody Who Loves You", even though it has a chord sequence very similar to parts of "Love And Affection".

None of these sound dated at all, but the same cannot be said of the more up-tempo tracks, which have a definite seventies singer-songwriter-mild-rock sound to them.  I find them very reminiscent of Tim Buckley's album Sefronia - that laid-back groove and tastefully restrained lead guitar.  It is a good sound but less convincing here than on Tim Buckley's album.
More pointless drivel from mark