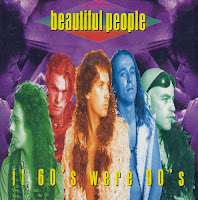 I've owned the single "If 60s Were 90s" for ages now, after picking it up cheap somewhere.  It's one of my favourite unknown curiosities - a lazy, dance-y, very obviously of-its-time track built on the shuffling Soul II Soul "Keep On Moving" beat that indie-dance (over) used in the mid-nineties.  In overall sound it's very similar to Moodswings' cover of "State Of Independence" (which features Chrissie Hynde, trivia lovers!).

I call tracks like this "dust bunnies" - those efforts lost under the bed, if you will, of Time itself.

Ahem.  Anyway, here's the unique concept: "If 60s Were 90s" is constructed from a whole slew of samples from Jimi Hendrix - all officially sanctioned, at that.  The guitar samples all come from "Voodoo Chile", while "If 6 Was 9" provides the vocal samples.  It's very, very well done - just like, to use the artist's own description on the video:

That said, I was a little sceptical about the idea of a whole album based on the same idea.  Sure, there's plenty of Hendrix material to work with (particularly if you have the multi-tracks available); and let's not forget that Jimi was so, so far ahead of his time that his music could easily fit into any subsequent decade. But nine tracks of it?

Certainly, the title track is the most cohesive as an overall song, but the album as a whole has grown on me.  The other tracks are more exercises in a groove, without a song structure as such.  But the samples are all well chosen and well woven into the overall feel.  I'm not familiar enough with Hendrix's output to recognise all of the samples (although there's a handy samples chart included) and since the credits include "additional guitar" on some tracks, I can't say for certain what's been added.  It does all hang together though.

Other than the title track, stand-outs for me include "Feel The Heat", which samples the intro from "Long Hot Summer Night" (Electric Ladyland, 1968) and loops it into a really funky riff; the first track, "Coming To Get You", which contains some fantastic guitar; and "Sock It To Me" which weaves the samples around some atmospheric synth sounds and an overall sound that reminds me of nothing so much as Flowered Up's "Weekender"*.

As an overall exercise, it's not an unqualified success, but enjoyable and good fun.

No excuses for the cover art though, it's dreadful.


* While we're on the subject, take a look at the video for "Weekender" - I'd never seen it before.  Here's part 1 & part 2.
More pointless drivel from mark