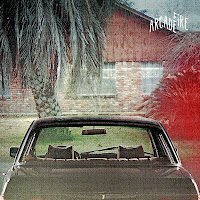 I first heard "Ready To Start", the second track on The Suburbs, when I was waiting for re-runs of  Scrubs to come on E4.  It was in a trailer for Skins, and I had to google it to find out what the music was because I didn't have a clue and it didn't sound like anyone I knew.  Since then I've loved the track but haven't listened to the parent album, so I thought it was about time I corrected this.

There's plenty to enjoy on the album - my favourite tracks are the driving, very rhythmic ones such as "Ready To Start" (of course), "Half Light II (No Celebration)" and "Sprawl II (Mountains Beyond Mountains)" - but there's also too much filler.  The whole thing is over an hour long and could use some editing.

There's also clearly some grand unifying theme - you don't have tracks with roman numerals after them if there's not some concept lurking around - but it escapes me.  Perhaps it's something to do with life in the suburbs?  I'm just guessing of course.
More pointless drivel from mark