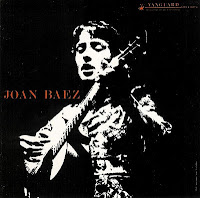 I bought this as part of my grand plan to listen to lots of classic albums from history (starting in the fifties) and realised that I already knew it.  My parents own this album and I listened to it during my teenage years.  The cover is different for some reason (I think - I don't have my parents' copy to hand) and so this threw me, but as soon as I listened to it again, I recognised every song.

If you haven't heard it before, then the first song, "Silver Dagger" is as representative of both the album and Baez's unique voice as any.  Accompanied only by her own guitar playing, her voice ranges from beautifully soft to ice-clear stridency and back again.  The melody is a traditional one, but you might recognise it because Saint Etienne used it for "Like A Motorway" (from Tiger Bay, 1994).  The other reason I like "Silver Dagger" is that, unlike a number of the other songs, it is sung from a woman's perspective.  When the song is written from a man's point-of-view, that's how Joan Baez sings it (for example, "East Virginia"), which I find slightly jarring.

Other favourites: "The House Of The Rising Sun", which is sung from a female perspective (unlike The Animals' version) and makes much more sense like this (and is the original sense); and "John Riley", a song which I think is very touching.  But all of the songs are good, and worth a listen even if you don't like folk.

Packaged with this album, in the edition I bought (called Songbird) was a version of the album Folksingers 'Round Harvard Square (1959), which was the very first album on which Joan Baez appeared.  It isn't a Joan Baez album, as it contains songs from various singers.  For some reason, only the tracks on which she features are on this version, whereas the original contained more songs.  They all sound a bit bloodless compared to the performances on her first solo album - nice enough but not worth going back to again.
More pointless drivel from mark