Clocking on for the day job one more time 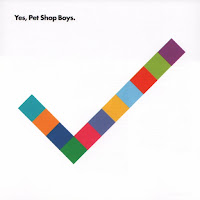 This doesn't feel like an album that had to be made, rather just what the boys did to fill in time between other projects. It's very identifiably Pet Shop Boys: Neil's fey, surprisingly weak vocals, the heavily reverbed synths and the tastefully melancholy mood; it's just not very good.

It's all very lush and beautifully produced, but ultimately a little stale and lifeless. Neil Tennant's voice is a taste that I thought I had acquired, but found surprisingly grating this time round, and the rather forced melodies didn't help. Stand out tracks include "Love etc." and "The Way It Used To Be", but only for being a little less meh than everything else.

I have nearly every Pet Shop Boys album up until this one, but this is where the boys lost me. I bought the album when it came out but didn't bother listening to it, and now I've come back to it eight years later, I don't feel like I missed out.
More pointless drivel from mark