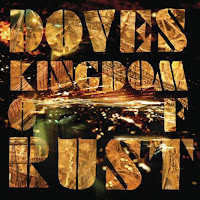 Last in a quartet of latest (at the time) albums by favourite artists that I bought together (see Invaders Must Die, Yes and No Line On The Horizon), and probably the best of the bunch. Doves had a very distinctive sound and a wonderfully creative approach to what is still, at heart, guitar-based pop/rock.

Lead track "Jetstream" illustrates this very well, packing some cool noises, a great melody and a real sense of dynamics into its five-and-a-half minutes; from the choppy, tremelo-d guitar leading us in, through sublte picking on a guitar, with a kick coming in after two minutes, heavy phase on the hi-hat and some lovely floaty synth sounds, all building beautifully. It's a trick they repeat with the title track, an almost countrified two-step with strings and everything. Great stuff.

Everything here is very identifiably Doves, with hummable melodies and superb sounds. "10:30" stands out for me for its fantastic build and heads down rock in the middle. There's something controlled and yet borderline psychedelic about it which I love, and if I could, this is the kind of music I'd make. The slower tracks are also good, although not my favourite of theirs - I think they sounds very close to Elbow, who do it slightly better.

At the time of writing, Kingdom Of Rust is Doves' last album, which is a shame because all four of their releases are superb. Officially they are "on hiatus", but the three members have all subsequently released albums in separate acts, and given their level of success relative to Doves, I find it hard to believe that if they were happy to work together again that they wouldn't have done so by now.
More pointless drivel from mark