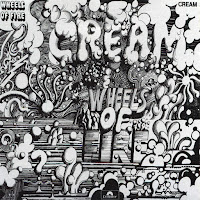 Cream's legacy and reputation is poorly served by their recorded output. The albums are mired in muddy production and marred by shockingly poor quality control. Wheels Of Fire is a case in point. There are a few jewels in the muck here, but they are obscured by period nonsense and self-indulgent wankathons.

What Cream actually did best, nowithstanding their influence on hard rock bands to come, was pop music. Sadly, by the time of this album, they were veering between cod-psychedelia and blues as a competitive sport, and very little comes off well by it. "White Room" is a good enough song to survive, and "Born Under a Bad Sign" is a nice cover. Of the live tracks, "Crossroads" has some stupendous guitar playing and a sense of energy that carries it through.

Everything else is awful, albeit in fairness, different degrees of awful. Tracks like "Sitting On Top Of The World" and "Those Were The Days" are average songs with odd arrangements. On the other hand, Ginger Baker holds responsibility for the two most pungent stinkers, "Pressed Rat And Warthog" - egregious sixties whimsy - and the excruciating "Toad", a fifteen minute drum solo. FFS. No-one should have to experience that.

Quite why this is in Rolling Stones 500 Greatest Albums list is honestly beyond me. Just get a Cream best of and you'll be much happier.
More pointless drivel from mark